Badminton is a racket sport played by either two opposing players (singles) or two opposing pairs (doubles), who take positions on opposite halves of a rectangular court that is divided by a net. Players score points by striking a shuttlecock with their racket so that it passes over the net and lands in their opponents' half of the court. A rally ends once the shuttlecock has struck the ground, and the shuttlecock may only be struck once by each side before it passes over the net.

The shuttlecock (or shuttle) is a feathered projectile whose unique aerodynamic properties cause it to fly differently from the balls used in most racket sports; in particular, the feathers create much higher drag, causing the shuttlecock to decelerate more rapidly than a ball. Shuttlecocks have a much higher top speed, when compared to other racket sports. As the shuttlecock flight is stubbornly affected by wind, competitive badminton is always played indoors. Badminton is also played outdoors as a casual recreational activity, often as a garden or beach game.

Since 1992, badminton has been an Olympic sport with five events: men's and women's singles, men's and women's doubles, and mixed doubles, in which each pair is a man and a woman. At high levels of play, the sport demands excellent fitness: players require aerobic stamina, agility, strength, speed, and precision. It is also a technical sport, requiring good motor coordination and the development of sophisticated racket movements. 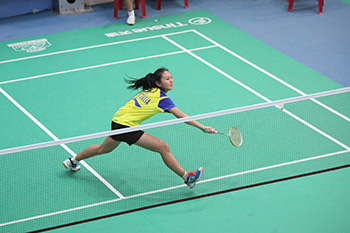 Badminton was known in ancient times; an early form of the sport was played in ancient Greece. In Japan, the related game Hanetsuki was played as early as the 16th century. In the west, badminton came from a game called battledore and shuttlecock, in which two or more players keep a feathered shuttlecock in the air with small rackets. The game was called "Poona" in India during the 18th century, and British Army officers stationed there took a competitive Indian version back to England in the 1860s, where it was played at country houses as an upper class amusement. Isaac Spratt, a London toy dealer, published a booklet, "Badminton Battledore - a new game" in 1860, but unfortunately no copy has survived.

The new sport was definitively launched in 1873 at the Badminton House, Gloucestershire, owned by the Duke of Beaufort. During that time, the game was referred to as "The Game of Badminton," and the game's official name became Badminton.

Until 1887 the sport was played in England under the rules that prevailed in India. The Bath Badminton Club standardized the rules and made the game applicable to English ideas. The basic regulations were drawn up in 1887. In 1893, the Badminton Association of England published the first set of rules according to these regulations, similar to today's rules, and officially launched badminton in a house called "Dunbar" at 6 Waverley Grove, Portsmouth, England on September 13 of that year. They also started the All England Open Badminton Championships, the first badminton competition in the world, in 1899.

The International Badminton Federation (IBF) (now known as Badminton World Federation) was established in 1934 with Canada, Denmark, England, France, the Netherlands, Ireland, New Zealand, Scotland, and Wales as its founding members. India joined as an affiliate in 1936. The BWF now governs international badminton and develops the sport globally.

While originated in England, international badminton has traditionally been dominated by a few Asian countries, plus Denmark from Europe. China, Indonesia, South Korea and Malaysia are among the nations that have consistently produced world-class players in the past few decades and dominated competitions on the international level, with China being the most dominant in recent years.

Badminton has its origins in ancient civilizations in Asia and Europe with a game called battledore (bat or paddle) and shuttlecock.

The name ‘Badminton’ comes from a stately home in Gloucestershire, England – home of the Duke of Beaufort.
The contemporary form of the game called ‘Poona’ was played in India in the 1800s. British officers in the mid 1800’s took a form of the game called ‘Poona’ back to England and it was introduced as a game for the guests.
The world governing body, International Badminton Federation (IBF) was formed in 1934 with nine members Canada, Denmark, England, France, Ireland, Netherlands, New Zealand, Scotland and Wales and now has over 150 member countries.

Badminton is extremely popular in Asia with 15,000 spectators seen at finals of major badminton matches in Indonesia and Malaysia.

More than 1.1 billion people watched badminton's Olympic debut on TV in 1992.The most successful badminton countries at the top level are China, Korea and Indonesia.

A total of 15 medals were contested at the Athens Olympic Games in badminton across the five disciplines - singles (men, women), doubles (men, women) and mixed doubles.

The Commonwealth Games also has a Teams event for badminton – as well as an Individual knockout competition. Teams are in pools, the initial is a round robin format, and the winners of each pool progress to a knockout competition for the medal placing. Each tie in the Teams Event for the Commonwealth Games consists of one match in each of the five disciplines – singles (men, women), doubles (men, women) and mixed doubles.
The IOCs Olympic Programme Commission Report released after the Athens Games showed badminton to be ranked 11th most watched sport from the TV broadcasts from the Athens Games.

Badminton had its Olympic debut in Barcelona in 1992.

Badminton was introduced to the Commonwealth Games in Kingston Jamaica in 1966.

Australians have won 11 badminton medals at the Commonwealth Games.

A shuttle weighs between 4.74 and 5.50 grams. The highest quality shuttles have a natural cork base covered by thin leather, and 16 goose feathers from the bird's left wing that are held together with thread and glue.